While researching the parish Veliko Trgovišće in Hrvatsko Zagorje, I came across a letter from a concerned father of a teacher named Stefania to the parish’ priest in which he warned him that the marriage of his daughter to a teacher Mr. Biščan would be dangerous because of her illness (tuberculosis).

Despite this paternal warning, I found a record in the parish’s records of the subsequent marriage of the teacher Stefanija (b. 1878) to the teacher Stjepan Biščan (b. 1869) on April 6, 1899.

Love, in the end, overcame the drought and a worried father’s warning. I was interested in this story because I have been working as a history teacher for the last 30 years.

I enclose a transcript of the father’s letter to the pastor with an English translation. The original letter is full of spelling mistakes, but it should be taken into account that it was written at the end of the19th century when the majority of the population in Croatia was illiterate. 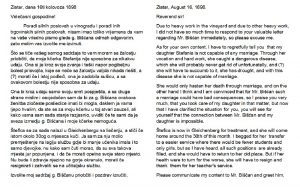 We will help you

For those interested in visiting Croatia, we are available as giudes, translators or drivers to your place of origin which often lead to many happy reunions.
Visiting your place of origin in Croatia ( contacting distant relatives, priest, local office, photographing old houses, village, church, cemetery)...